I BORROWED my student’s Sony Alpha DSLR one afternoon and took a snapshot of a flower in front of the school building.

I love the contrast between the orange flowers and the dark green leaves. 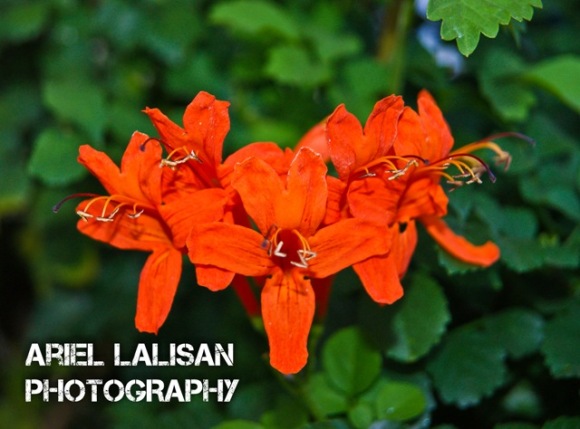 I can’t wait to get my very own DSLR.

I went inside a camera shop at KCC Mall in GenSan. I came across this family, which were picking a DSLR. The sales assistant suggested that they get the Nikon D7000. They asked to try it out. It was the mother who held it in her hands and tried to take a shot. The son, about 13 years old, was instructing her where to hold it. She didn’t know where the shutter button was. The son also tried it without looking through the viewfinder. They asked the sales assistant to show them the shots they took. They liked the shots and bought the camera as if it were just an ordinary digital camera.

I felt sad for the designers of modern DSLR; they work so hard to come up with advanced features so that their cameras can produce excellent photos, only to find out that their brainchild would just land in the hands of people who can’t tell the difference between a good photo and a severely underexposed one or one with the subject thrown out of focus. I felt sad for myself because even if I guffaw at that family I encountered at the camera shop for buying a white elephant, the truth remains that I can’t afford one.

take a look back

thanks for taking the journey with me